In Solidarity with the Women on the Streets: Feminist Foreign Policy Demands towards Iran 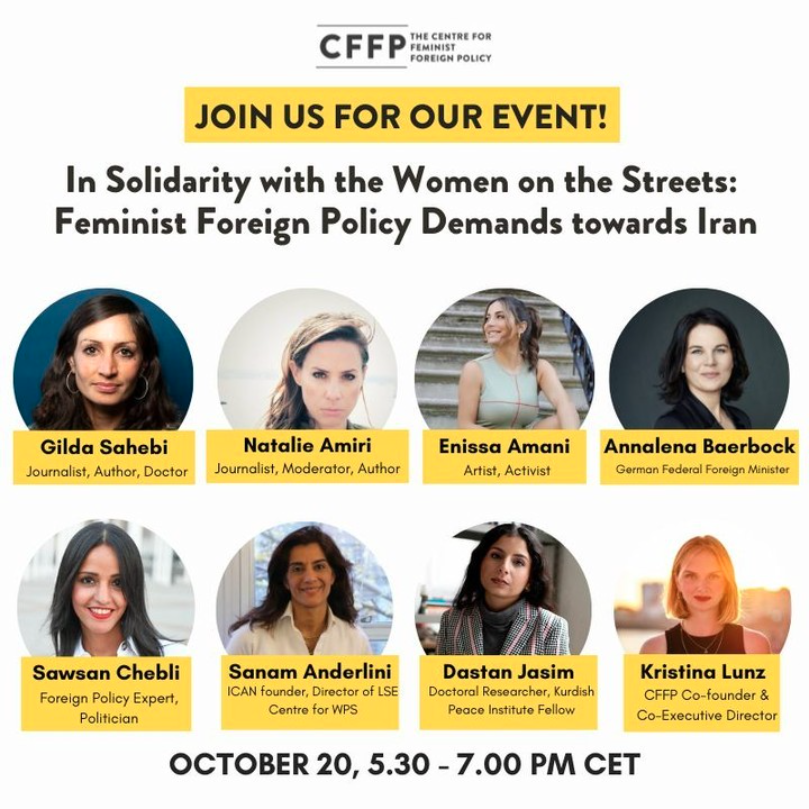 These days, all eyes are on Iran. The brutal death in custody of Jîna Mahsa Amini on September 16, after the young woman was arrested by the Iranian “morality police” in Tehran, has sparked nationwide protests, mainly led by students, human rights defenders, feminists, and women in general. The now globally known slogan “Woman, Life, Freedom”, based on the Kurdish feminist movement, proves the feminist nature and demands of the protests.

Over the past weeks (as of October 18th 2022), an estimated 185 people have been killed, many more arrested, and internet access has been heavily censored – but the protesters bravely continue to challenge the Iranian government.

The protests are not a “women’s issue”. The massive solidarity within Iran and the many different people coming together for the protests show the increasing disappointment with the government. People are fighting not only for women’s rights but speak out against corruption, unemployment, political repression, and soaring prices. Like many around the globe, we stand in solidarity with the protests and are outraged about the death of Jîna Mahsa Amini.

We will therefore organise an event, together with the experts Gilda Sahebi, Natalie Amiri, Enissa Amani, Sawsan Chebli, Sanam Anderlini and the German Federal Foreign Minister Annalena Baerbock. We will have an honest and bold conversation about the current situation in Iran and possible feminist reactions to it. Our online event will discuss responses to Iran and the ongoing protests specifically from a feminist perspective. With more and more countries announcing a Feminist Foreign Policy, we want to use this space to articulate clear and actionable demands – not only for the German and Iranian governments but the international community in total.

The event will be held in English.