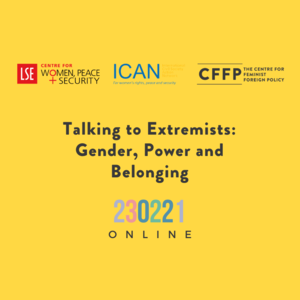 Along with ICAN and the LSE Centre for Women, Peace and Security, CFFP hosted the second event of the “Coming of Age of Women Peace and Security, In Conversation” series. During “Talking to Extremists: Gender, Power, and Belonging” Sanam Naraghi Anderlini MBE speaks with Shannon Foley Martinez, Deeyah Khan and Mossarat Qadeem about their experience of talking to extremists.

As polarised echo chambers are exacerbating the divisions and entrenching extremes, the parallels between acts of domestic terrorism, such as the January 6th insurrection against the US Capitol in Washington, DC, and violent extremist movements in other parts of the world are evident. The radicalisation of individuals – men and women – is a complex process. Drawing people away from violent extremism is equally complex with a need to understand not only the political, cultural, psycho-social and emotional factors at play but also the centrality of gender ideology and roles.