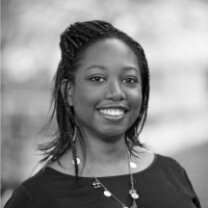 Toni is a graduate of the University of Edinburgh (Politics, PhD). Her work seeks to understand prevailing global power hierarchies that inform cooperation and conflict within the international system. Drawing on Black feminist thought, decolonial and postcolonial feminisms, her work has explored the politics of knowledge making in the context of the Women, Peace and Security, Global South perspectives on Feminist Foreign Policy and the gendered and racialised nature of and responses to contemporary crises. Toni’s current research provides feminist analysis on the foreign practices of Global North actors in the Global South. Much of this work is situated within the activities of formal institutions like the African and European Unions, and she has published extensively in these areas.

Toni is currently an executive committee member of US based Women Also Know Stuff, a database promoting the work of women in political science globally. Currently, she is joint editor in chief of JCMS: Journal of Common Market Studies, she is also a member of the editorial boards of European Journal of Politics and Gender and Politics and Gender among several others. Toni is an experienced speaker and moderator, commentator, and analyst. She is also an occasional media commentator having contributed to or featured in a range of media including BBC, Irish Times, NewStatesman, The Scotsman, Newsweek and Foreign Policy.